A Funny Marriage is a Happy Marriage 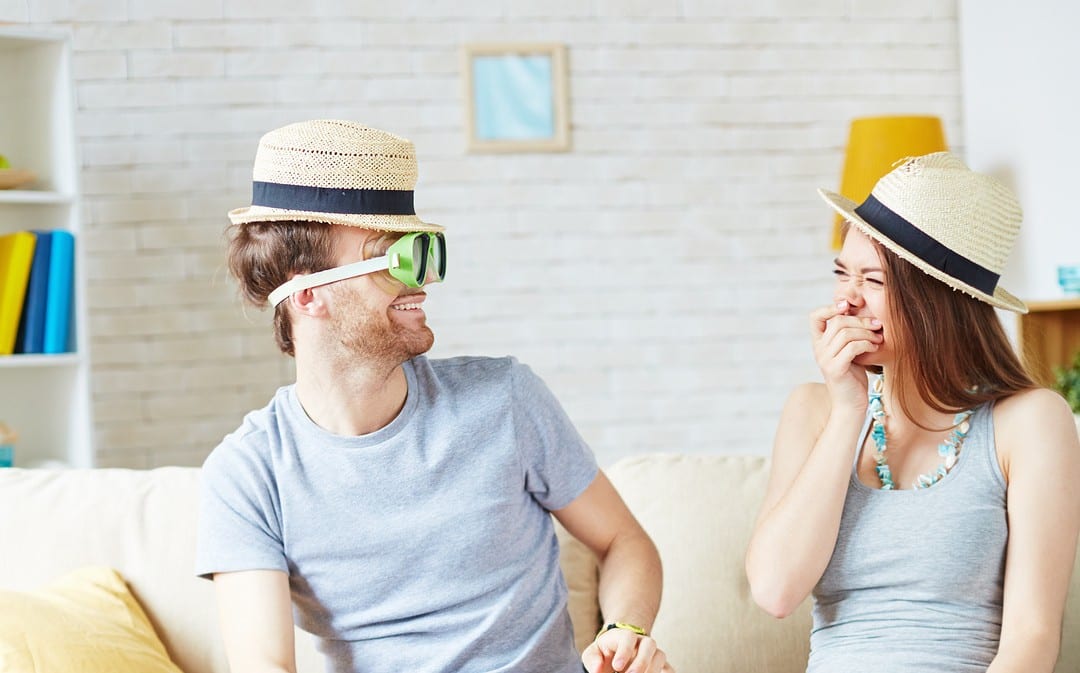 Use This Simple Trick to Transform Conflict into Connection

Friction and annoyances are inevitable in every relationship. But you don't have to fight. In fact, there's a simple strategy that you can use to turn moments of potential conflict… into a stronger connection.

The first telltale sign that I’m getting upset with my husband is my clenching jaw. What’s the trigger? Any one of a dozen things, but all having the common core: He did not do something the way that I thought he should have. The scene of an errand undone, or of a small pale face burnished by sunburn will tighten my face and harden my eyes in annoyance. I start rehearsing my self-righteous (and entirely justified!) lecture in my mind.

But then my husband, a marvelously funny man, will peer, wide-eyed and blinking, into my face, cock his head like a parrot, and start singing a little song about me and the reason that I’m mad — usually to the tune of some 80’s rock anthem. He’s so good it usually even rhymes. By the end I can’t help but giggling at his silliness, and my amusement has chased away my frustration. I swat him with a dishtowel and he runs away, playfully, and then peeks his head around the corner in exaggerated fear. All is forgiven, and our evening rolls on.

In contrast, when my husband is upset about something, he tends to rant. Over the twenty years of our marriage I have learned that if I just listen to him and nod appreciatively, he’ll pick up steam, like a train chugging ever faster down a track, and eventually his rant will turn into a full-on stand-up comedy routine about his irritations — complete with ficticious embellishments and dramatic re-enactments. It’s hilarious. His recent tirade about some annoyances eventually had me laughing so hard I literally could not speak. We’d just moved into a new house and then realized, to our new neighbors, his bellowing and my sobbing with laughter probably sounded like some kind of crazy domestic violence situation. The idea that they might call the cops on us sent us into a new round of hilarity.

A Funny Marriage is a Happy Marriage

There are things about my husband that I sometimes wish were different, and I’m sure that he could provide you a very long list of all the ways I disappoint him. But the fact that he is funny, and I am easily amused, has saved our marriage from the many things that could have sunk it.

Stop A Fight: Use Humor

All relationships have natural friction points. Differences between partner’s opinions, personalities, hopes, and expectations all create hurt and frustration. This is true for every couple, even the happiest. Research into relationships conducted by Dr. John Gottman of The Gottman Institute, in Seattle Washington, estimates that up to 80% of the problems that all couples have are due to these intrinsic differences. These are therefore “unsolvable problems” that are never going to change. You may be surprised to learn that happy couples have just as many differences and circumstantial hardships as an unhappy couples, yet they are thriving anyway. Why? One thing that happy couples often have that struggling couples don’t, is humor.

Going for a giggle in a tense moment sounds simplistic, but reaching for humor instead of anger, defensiveness or judgment during a friction point does four extremely important things to strengthen your relationship:

1) It creates a “repair attempt”

The happiest, most successful couples are able to stop an argument in it’s tracks by attempting to repair the impending rift before it gets too wide. Reaching out to an angry, upset, or hurt partner in efforts to close the gap and restore peace (and then having that olive branch accepted) is a “repair attempt.” When the thunder and lightning of a bad fight are rumbling on the horizon and one partner is able to crack a joke that makes the other person smile, the sun peeks through the ominous clouds. Moods lift, the problem seems less serious, and it’s easier to reconnect.

2) It breaks a negative mood state

Negative moods like anger, resentment, or hurt tend to reinforce themselves, and get stronger over time. When you are upset about something, you ruminate about it — turning it over and over in your mind, like a cow chewing it’s cud. The more you think about all the horrible ways in which your partner has disappointed or offended you, the worse you feel. But when someone throws a cold splash of unexpected humor into the face of self-righteous anger, it breaks the pattern. Getting knocked off keel by something funny shifts the trajectory of a bad mood, allowing positive feelings to flow back into an otherwise unhappy outcome.

Nobody behaves well when they are feeling attacked, threatened or shut out. I guarantee you, that when you aggressively confront your partner about something it will nearly always provoke them to feel offended and defensive. Likewise, if you coldly dismiss your partner’s complaints you are inviting them to get more angry and hostile. But responding with humor will nearly always get a more positive response. Why? Because it restores emotional safety. When you are funny, unexpected, and lighthearted you are communicating, “I’m not really that mad. You’re safe with me.” Defensiveness is diffused, and aggressiveness wanes: Connection has been achieved. All of a sudden, whatever you are in conflict about seems more manageable, and easier to deal with.

4) It emphasizes the positive aspects of your relationship

Some people are wary about being lighthearted with relationship problems that seem serious to them, saying, “But won’t it minimize my feelings?” Or, “But if we just joke about it, things will never change!” So they insist on grinding away at their differences, and becoming increasingly unhappy when things stay the same. Newsflash: You and your partner will always be different people. They will never change into exactly who and what you think they should be. Focusing on the negative aspects of your relationship will make those differences more pronounced and will change the emotional climate of your marriage for the worse.

In contrast, enjoying your partner and having fun with them, and appreciating the good things about them will help you have a better relationship. And the grand paradox is that when people feel safe, accepted, and cherished for who they are, it is actually easier for them to change for the better. When you use humor to communicate to your partner that you enjoy them, they will be more eager to please you and less inclined to fight with you.

So the next time things start to feel hard between you and your partner, do something unexpected and funny. Crack a joke. Sing a silly song. Make a face. Emphasize the funny parts of your disagreement. Have a good time. And if the neighbors call the cops on you — blame me.

Was there a time that something funny saved you and your partner from a fight? Do share! Tell us in the comments below…